After a spectacular launch and a long cruise through the black reaches of space, the Mars Science Laboratory—better known as the Curiosity rover—amazed the world with its daring landing in Gale Crater.

Curiosity is the biggest rover ever sent to Mars, and carries the most advanced suite of instruments, in order to discover the story of the planet’s habitability.

Use this page as a quick guide to the rover’s daily adventures:
Quick Update   |   Mission Basics   |   Ride Along 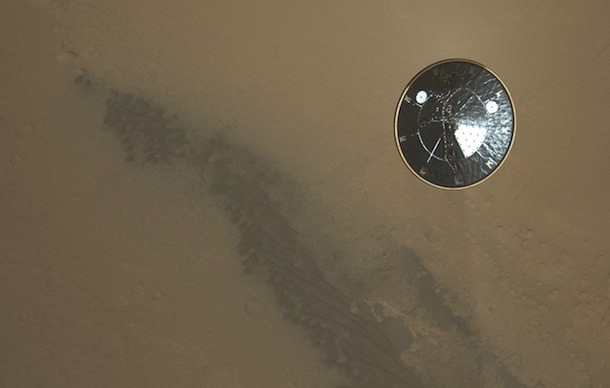 Like a scene from a sci-fi movie, only real: Curiosity’s heat shield falls away during the landing. This is just one frame in the high-res movie that was filmed as the rover was lowered to the surface.

After a few months of local work, Curiosity will head for these hills, where Mars explorers believe there is a story to uncover about a warmer, wetter Red Planet in the past. More pictures >

All of the rover’s science instruments have been checked out, and some are already taking measurements. Now that the first test drives have been completed, Curiosity will head off to spend its first few months of serious work at a place dubbed “Glenelg” before beginning the long trek to Mt. Sharp. More news >

The rover and its scale, a composite of two NASA diagrams. See also this rover infographic from Space.com.

Tracking Mars and the Rover:

Ways to Ride Along

Day Hikes in the Labyrinth of Night