Late last month, visitors to Grand Canyon National Park in Arizona witnessed a rare and spectacular sight. A temperature inversion (where a layer of cold air is trapped beneath warm air) led to a canyon filled to the brim with clouds.

On the very same day, a robotic spacecraft at the planet Mars captured a similar scene. This one was a much more common event, but one that still makes for incredible imagery. Valles Marineris is a network of canyons that in many ways looks similar to the Grand Canyon–except that at more than 4,000 kilometers in length, if it were on Earth it would stretch across most of the United States.

This canyon, too, sometimes fills with clouds, made of tiny particles of water ice, though it’s not caused by an inversion. Despite the Red Planet’s well-earned reputation as a dry desert, there are hints of water on its surface and in its atmosphere. The Mars Color Imager (MARCI) on board the Mars Reconnaissance Orbiter makes daily observations of the entire planet. On November 29 and 30, MARCI returned pictures of wispy clouds clinging to the summits of Olympus Mons and the other towering volcanoes. It also showed Valles Marineris, a long horizontal scar probably formed in part by the tectonic effects of all those volcanoes. As happens seasonally, the canyon was clearly filled with clouds.

Some of the first detailed pictures of this phenomenon came from the Viking orbiters back in the 70s. This still-stunning capture shows the maze of canyons at the west end of Valles Marineris called Noctis Labyrinthus, “the labyrinth of the night,” as the morning sun vaporizes water that condensed in the shadows the previous night.

More recent missions bring us the same kinds of scenes in even more detail. Here, the Mars Express spacecraft’s high-res camera reveals a portion of the immense canyon haunted by haze.

It’s enticing to imagine the view from the edge of a Martian cliff on such a day. Thanks to an unusual gift from the Grand Canyon, now it’s a little easier to do so. (Another temptation: picturing past eons when the skies on Mars might have been a little more blue.) 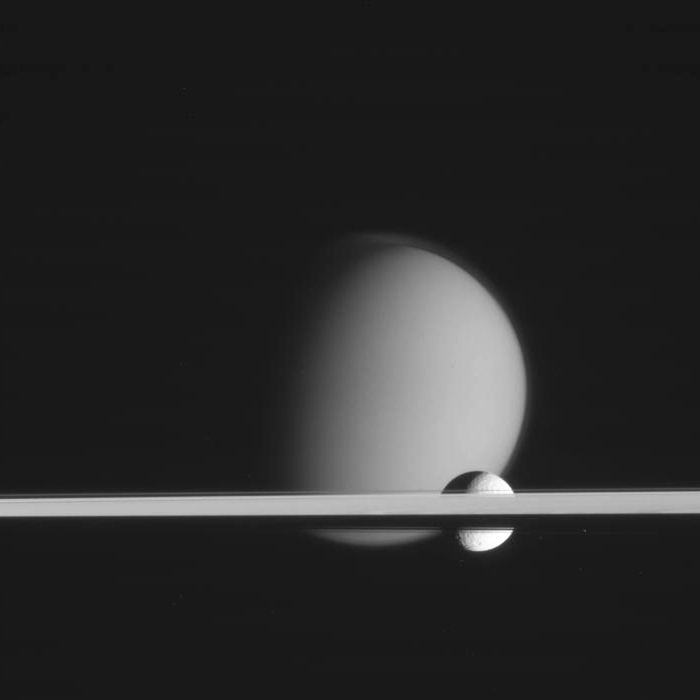