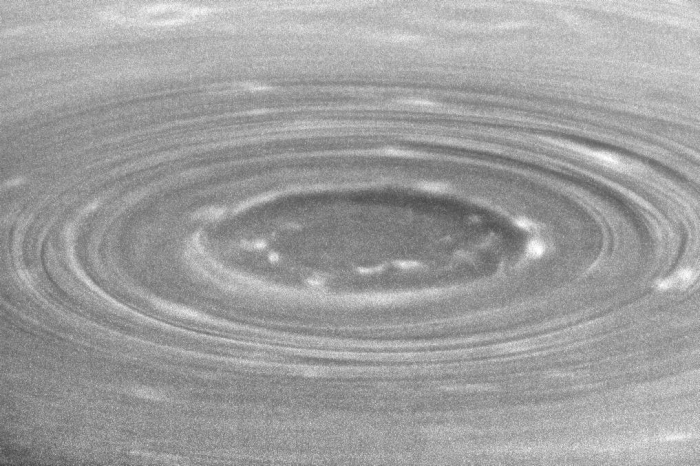 New images of Saturn from the robotic spacecraft Cassini are shedding new light on monstrous storms that swirl at both poles of the ringed planet. “These are truly massive cyclones, hundreds of times stronger than the most giant hurricanes on Earth,” said one mission scientist. Cumulus clouds twirl around the vortices, betraying the presence of giant thunderstorms lurking beneath. Learn more.

The storms do not disturb the bizarre hexagonal cloud formation we’ve discussed several times before. See the new infrared maps of the north (left) and south (right) poles below. 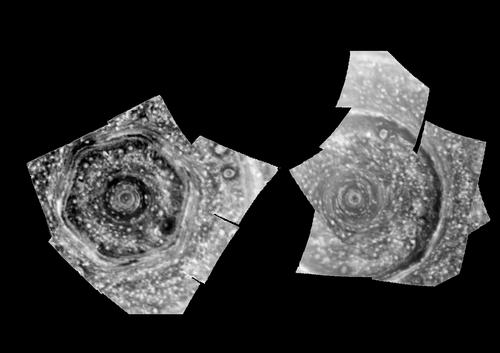 How intriguing! One might expect a circular pattern but a hexagon? The mind boggles at the cause. Well, at least my mind boggles. It boggles easily.

As Steven Wolfram has shown with his mathematics, the most amazingly beautiful and complex patterns can arise spontaneously from the simplest of beginnings.

All, all is mathematics.

That would be, er, um, STEPHEN Wolfram.

Perhaps not ALL is mathemtics. Some is spelling.